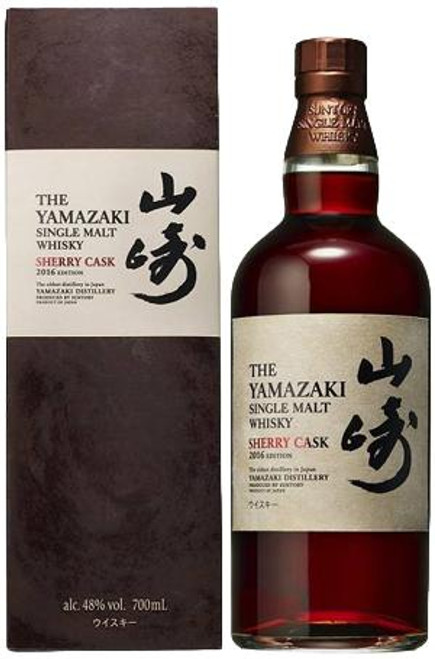 The successor to the legendary Yamazaki Sherry Cask 2013; the 2016 release did not dissapoint, with critics calling it "a work of art" and giving it near perfect scores. The NAS release sits at the top of Suntory pile (not including the incredibly expensive, extremely high age statement releases). The vatting for this release was much the same as for the 2013, simply with an extra couple of years of maturation.

Yamazaki was built it 1923 under the guidance of Shinjiro Torii, the founding father of Suntory, with the first whisky running off the stills on November 11 1924 at 11.11am. Initially employing Masataka Taketsuru, who had lived in Scotland to learn the art in the preceding years, Yamazaki enjoyed popularity post World War 2 and is now one of the most famous names in Japanese whisky.

The distillery has eight wash stills and eight spirit stills, with the wash still direct gas fired and the spirit stills indirect steam heated. Two of the spirit stills have worm tub condensers, all the rest have shell-and-tube. An array of sizes and generally descending lyne arms create a range of spirit styles at the distillery, although whiskies used for the single malt releases are often unpeated with tropical fruits.

Whiskies are matured in a variety of American oak ex-bourbon barrels and Spanish ex-sherry casks as well as Japanese Mizunara oak, although it is believed that less than 200 are able to be made each year making these whiskies very rare. They also use wine and umeshu casks in small amounts.