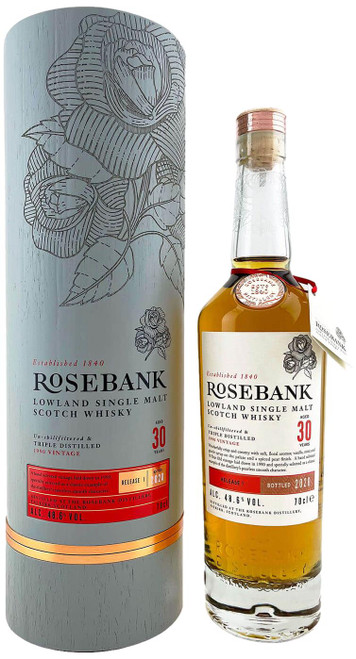 The highly anticipated first release of 'The king of the Lowlands', Rosebank, from the distillery's new custodians, Ian Macleod Distillers.

Nose: Soft and creamy, with layers of caramel wafer, vanilla and nutmeg.

Palate: Delicate and crisp, with a wonderful balance of gentle syrup, pear and pleasing oak spice.

Rosebank gained the moniker 'King of the Lowlands', due to the unparalleled quality of the whisky that was produced at this distillery until its closure in 1993. Upon it's closure, it joined the ranks of other cult distilleries such as Brora and Port Ellen; with devotees going to great lengths to collect the finite reserves of whisky that remain. Rosebank's combination of triple distillation and worm tub condensers produced a spirit that is full of fresh fruit and meadow flowers, but that also has a rich mouthfeel.

In 2017 Ian Macleod Distillers acquired the rights to Rosebank and are well under way re-establishing the distillery in its original location.