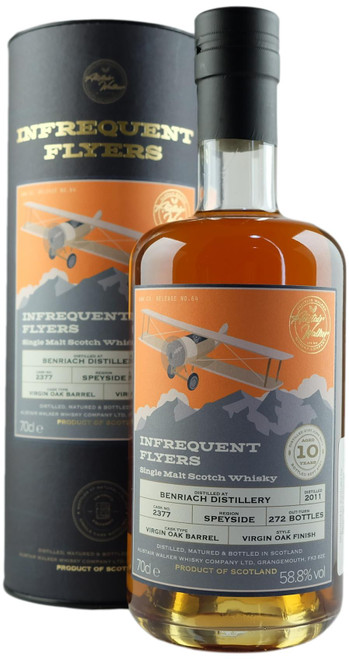 A 10-year-old single cask from the Benriach distillery, bottled by Infrequent Flyers as release #64.

Nose: Vanilla, toffee and almonds, with a hint of spice.

BenRiach is a distillery that we are lucky to enjoy in the 21st century. Built in 1887 as a sister distillery to Longmorn, it was a low-profile victim of the Pattinson Crash and closed just three years after ground was initially broken in 1900. It would take another 65 years until new owners Glenlivet would re-open the site, then to help with the malt needs of Longmorn. Although it enjoyed a sustained period of operation during those optimistic decades to come, BenRiach was largely consigned to blends and single malts very rarely seen.

The end seemed inevitable when the distillery was once again closed in 2002, deemed surplus to requirements, but the 2004 purchase by a Billy Walker-involved consortium has seen a remarkable rejuvenation for the brand. The BenRiach Distilling Company, now under expert guidance of Brown-Forman and Master Blender Rachel Barrie, has not only introduced this otherwise-overlooked distillery to single malt lovers around the world, but also painted bright futures for later acquisitions GlenDronach and Glenglassaugh.