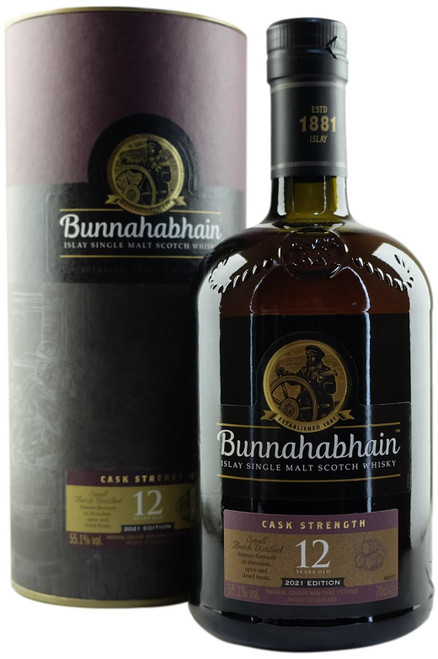 A cask strength spin on the classic 12-year-old single malt from the Bunnahabhain distillery, based on the north coast of Islay. This 2021 edition is small batch distilled and heavily sherry influenced. This whisky is delivered non-chill filtered, natural colour and at 55.1% abv.

Nose: Dark berries, citrus and toasted oak which gradually transitions to sweet vanilla and a hint of cinnamon spice.

Palate: Creamy chocolate, sherry-soaked fruit and a balanced nuttiness give way to cloves, nutmeg and a subtle sea salt spray.

Finish: A lingering sweet finsh with cherries and a touch of wood-spice.

Bunnahabhain is one of the nine active whisky distilleries currently on Islay (though this number is sure to change before too long). Based on the island's northeast coast, Bunnahabhain is a large and imposing distillery which was built during the Victorian era (1881) by William Robertson. Bunnahabhain's spirit, whilst historically peated, has moved further and further away from this. Today, roughly only 20-25% of the spirit produced at the distillery is heavily peated. Low fill levels and massive amounts of copper contact create a light, malleable spirit which has historically been prized by blenders. It is only recently that the true worth of Bunnahabhain as a single malt is being seen, often when matured in sherry casks, which provide a sweet richness and a spicy ginger note to the spirit.