The Oak Barrel is delighted to finally be able to reveal our latest whisky venture, partnering with some of our best loved whisky institutions from around Australia.

Hand-In-Hand is a collaboration between importers Liquor Library, bars Whisky & Alement and Helvetica, and The Oak Barrel.

3,400 kilometres apart, Melbourne’s Whisky & Alement and Perth’s Helvetica may be on opposite sides of this great brown land, but the two whisky bars share the same ethos and love for spirit. They are mandatory stops for any whisky lover who visits their respective cities, Oak Barrel staff included. Melbourne-based importer and bottler Liquor Library are responsible for some of the most special and tasty whiskies on Australian shores and have worked with German-based bottler Sansibar for these first two releases under the Hand-In-Hand label.

When we get together, we share whiskies. Having found a couple of casks that we all love we’ve decided to bottle them and share them with you.

First up are two peated whiskies, one from  Laphroaig the other  Ardmore. Their labels paying homage to two famous steam-powered machines in Scottish-Australian history.

Retailing through The Oak Barrel in Sydney and Casa De Vinos in Melbourne, they’re also available across the bar at Whisky & Alement (who made have a full bottle or two to sell as well) and Helvetica. Incredibly limited, these are whiskies to be opened and shared. They are whiskies that are just as likely to prompt discussions as they are to provide the flavour and colour to existing ones. 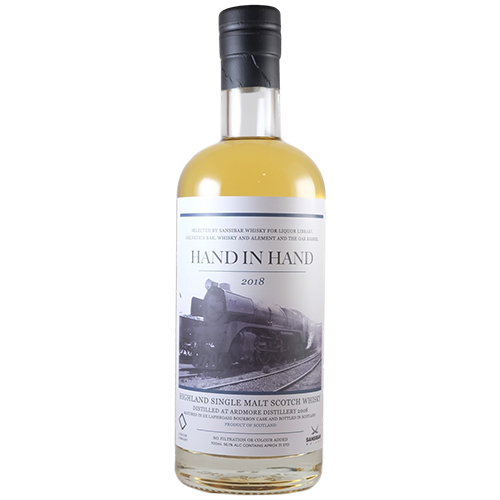 This Ardmore was distilled in 2008 and matured in an ex-Laphroaig cask, which held bourbon before the Islay distillery got its hands on it. Non-chill filtered and with no added colouring, it is bottled at 56.1%.

The R class locomotive, which is featured on the label, was the last steam locomotive to be introduced to the Victorian Railways. Conceived in the late 1940s to replace the A2 class, they were rolled out from 1951 onwards. The 1950s also saw the emergence of diesel locomotives, however, and as these new-traction trains slowly replaced steam, the Glasgow-built R class became caught in time. The pinnacle of steam development and innovation, bowing out at the height of its power.

It had originally been intended for these then-modern R class locos to be built at Melbourne’s Newport Workshops, which are still active today. Industrial issues and a backlog of required repairs to Victoria’s aging steam fleet meant that the facility was at capacity and the decision was made to order 70 trains from the North British Locomotive Company Limited of Glasgow.

Numbered R700-R769, once early teething issues were resolved the class served with distinction – particularly in express passenger services. Many of those teething issues revolved around shipping damage, something that any Scotch whisky importer can relate to.

But the roll out of diesel was swift and brutal. Older steam engines which had given their service were rightfully retired, but for the youthful R Class it seemed a cruel blow. Benched in their prime, VR recourses were allocated to upkeep on the newer diesel and electric models as these fantastic machines were resigned to back-up duties during peak periods of the 60s.

The final working R Class locos were retired in 1974 but in reality they’d been a rare sight for at least a decade. A handful have been preserved, with just a few in working order. R707 ‘City Of Melbourne’ and the oil-fired R711 ‘Spirit Of Bendigo’ are the two most notable examples. They evoke feelings of wonder and pride in their rare outings as they charge through the Victorian countryside, the glistening black paint schemes and distinctive red lining and smoke deflectors a sight to behold.

In February 1977, three years after the R class was withdrawn, Norman Case founded the Gillies Whisky Club of Australia in Wollongong. Whisky lovers gathered to share the amber spirit and began importing whiskies from Scotland, in many ways laying the foundation for the proceeding decades of whisky appreciation in this country.

Hand-In-Hand continues that tradition of loving, sharing and drinking exemplary Scotch whiskies with friends from all across Australia. This Ardmore has been brought across the seas from Scotland like the whisky lovers before us did, and the R Class before them. 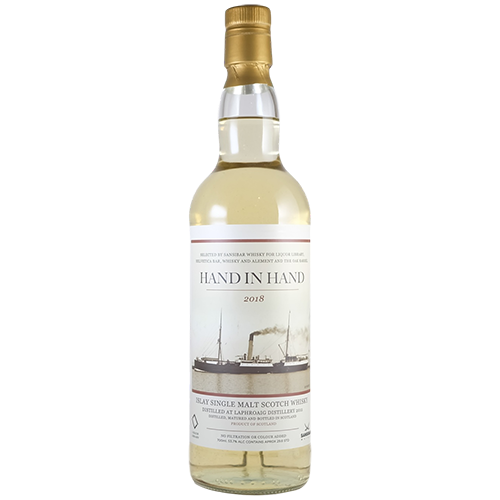 This Laphroaig was distilled in 2011 and has been bottled at 53.7% without chill filtration or added colour.

Featured on the label is SS Ferret, a Glasgow-built steamship which had a career shrouded in mystery and conspiracy as it found its way to Australia and was ultimately sunk here.

Built in 1871, the Ferret enjoyed an unremarkable existence until a fateful pleasure cruise around the Mediterranean. The ship was chartered by a group of men, led by James Stewart Henderson, in 1880 for a six-month cruise. Henderson, who was using a fake name, loaded the steamer with wine and provisions paying for the whole adventure in bills later found the be worthless and backed by a fake shipbroking company. Sailing through the Mediterranean, Henderson changed course and disguised the ship somewhere in the Atlantic, changing the name to ‘Bantam’.

A remarkable journey saw ‘Bantam’ cleared in Cape Verde and arrive in Santos, Brazil, on Boxing Day 1880. She took on coffee there and set sail for Marseilles in France, but instead travelled to Cape Town, South Africa, arriving under a third name ‘India’. As well as the name changes, various alterations to the deck and mast were made to enhance the illusion. Henderson sold the coffee, which he was meant to deliver to France, and sailed to Mauritius from where the Ferret/Bantam/India journeyed to Melbourne, via Albany, arriving April 20, 1881.

Henderson and team’s attempts to portray the ship as sunk and lost were not believed and legal owners, the Highland Railway Co., had advertised globally for its recovery. Unfortunately for Henderson, the ‘India’ was spotted in Port Phillip by someone who recognised the description of the boat from that widespread European publicity. Jumping ship before authorities arrived, Henderson and conspirators fled into the Victorian bush but were run down by police and imprisoned.

Rather than send the ship back, it was sold and remained in Australia, returning to the original SS Ferret name in 1883. Employed largely in cargo work, her demise came in November 1920 when she ran into a Yorke Peninsula (South Australia) beach in fog and heavy seas. The crew were rescued.

On 26 November 1920 Mount Gambier-based newspaper Border Watch reported on the wreck, writing it “ends the career of one of the most famous crafts that has ploughed Australian waters.”

It also quoted a report from Adelaide’s Advertiser, which reported, “Though the vessel has been lost, many persons are stated to have found a quantity of beer from It. The boat is lying a short distance from the shore, and last week some of the cargo drifted in and landed high and dry on the sand.

“Casks of beer were secured and sampled. The Ferret carried-close on 100 tons of beer. Mounted-Constables Jollyy and Ockenden are making investigations into the events of the last few days.”

Packed with wine and then floundered with beer. It may not have carried whisky, but the remarkable history of the SS Ferret might be our answer to Whisky Galore’s SS Politician.

If you close your eyes while sampling this Laphroaig, you can almost see and smell the SS Ferret as it would have smoked and steamed its way out of Albany bay – a famous region for Australian whisky. It was then on its way to Melbourne, its sailors gleefully unaware that their great maritime heist was about to come to an abrupt end.