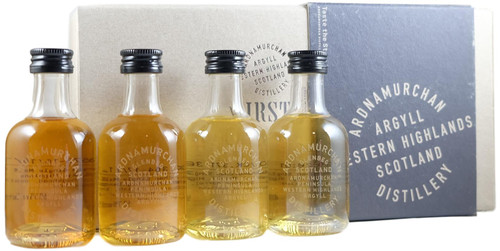 A tasting pack to coincide with the release of Ardnamurchan's inaugural single malt release.

Following a number of 'spirit' releases, Ardnamurchan's first release - as well as this tasting pack collection - has been air frieghted into Australia to align with the international release.

The distillery, founded by Alex Bruce and the team behind independent bottlers Adelphi, produce both peated and unpeated spirit. This pack features the inaugural release as well as three cask samples from the distillery.

Speaking with The Oak Barrel as part of Sydney Whisky Forum 2020, Bruce descripbed the whisky as being of its environment.

"We chose Arndamurchan, this remote, rugged, highland, west coastal peninsula, we chose it build a distillery, not because it do be impossible to get to and all that sort of stuff but most importantly we chose it because of the climate and what it is and what it can do to whisky.

"We’ve built a distillery, we’re trying to make the best possible spirit that we can but everything else we’re handing over to the environment. If I was to copy and paste Ardnamurchan somewhere else in Scotland or somewhere else in the world, you would get a very different whisky. The profile that we are naturally getting out there is a very maritime, very coastal profile."

Drinks By The Dram

Regions Of Scotland Whisky Tasting Set by Drinks By The Dram