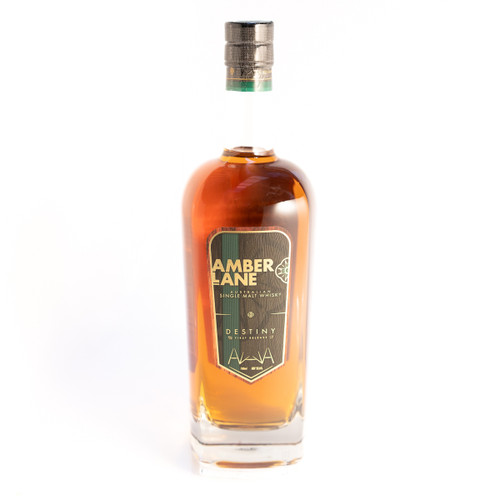 Destiny is the inaugural release from Amber Lane distillery, based in the Yarramalong Valley, NSW. The team behind Amber Lane, Rod Berry and Phil Townsend, have flown under the radar for the past five years, quietly tinkering and toiling behind the scenes producing some truly incredible whisky.

Destiny is a vatting of ex-Bourbon (primarily Heaven's Hill), Apera and PX casks, all matured well beyond the minimum (and all too prolific) 2 years and then bottled (in 700ml bottles) non-chill filtered and natural colour at 50.6% ABV. This is a viscous, unctuous, yet well-balanced whisky and as a first release is a very good sign of what's to come from Amber Lane!

Amber Lane is a whisky distillery based in the Yarramalong Valley on NSW's Central Coast. It was founded in 2017 by two amateur astronomers and friends, Rod Berry and Phil Townsend. The duo have since committed themselves to crafting excellent spirit and spared no expense in sourcing top quality, large format ex-bourbon barrels (primarily sourced from Heaven's Hill) and bodega ex-Pedro Ximenez casks. They took their time with maturation, waiting until the whisky was ready for bottling, rather than rushing to market after the minimum 2 years.

- Consistent high-quality mash bill that creates pleasing new make with an emphasis on the original barley together with a creamy sweetness;

- Non-chill-filtration in all expressions to preserve as many of the flavour-producing esters and congeners as possible; and

- A conscious preference for releasing our whisky at higher alcohol strength.