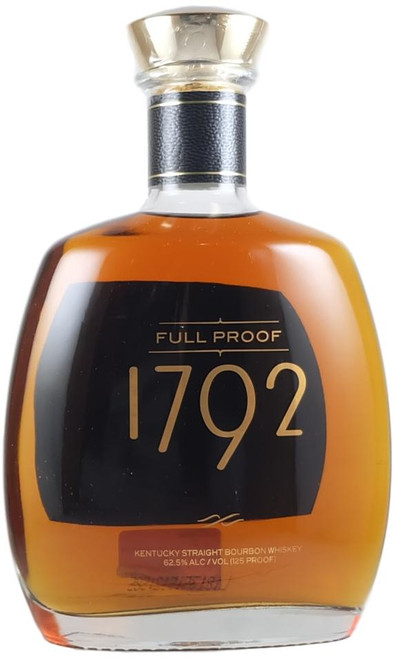 The full proof, cask strength version of the 1792 bourbon produced at the Barton 1792 distillery in Kentucky.

A limited edition release of the series, this is non-chill filtered - instead filtered through the lesser plate and frame method to keep the roundness of the spirit.

Caramels and vanillas with a distinct smokiness coming from the barrel char.

1792 is distilled at the Barton 1792 Distillery in Bardstown, Kentucky. Established 1879 it is the oldest still fully operational distillery in the town. A sprawling establishment situated on 196 acres, there are 29 warehouses and 22 other buildings that make up the distillery.

Sazerac bought the distillery and brand in 2009, where it sits along names like Buffalo Trace, Pappy Van Winkle and George T Stagg.

1792 references the year Kentucky became a state and the bourbon was originally called Ridgewood Reserve 1792 before a conflict with the ‘Woodford Reserve’ brand prompted a name-change and eventual shortening to just 1792.

The whiskey has become some of the most sought-after in recent years, the ‘velvet glove’ house style attracting drinkers and competition judges alike.

The mash-bill for these whiskies is undisclosed, but it is often referred to as "high rye" and the rye content could be between 15% and 25%. Some sources indicate 18% amongst 74% corn and 8% barley, although these are unconfirmed.

Certainly the amalgamation of rye and oak spice play a big part in the texture across the range.